🔥 Need some awesome hanfu before your holidays? — Save extra 10% on all products with the code “NEW2021” 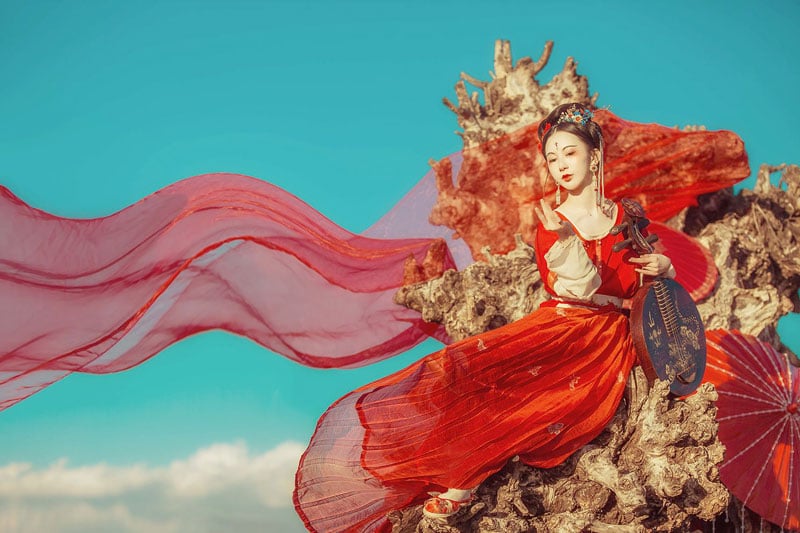 In recent years, oriental fashion and clothing are gradually popular in the West. At first, the trend of Korea swept the world, then the Japanese fashion circle showed high brilliance, and now the traditional elements of China are also loved by the public. 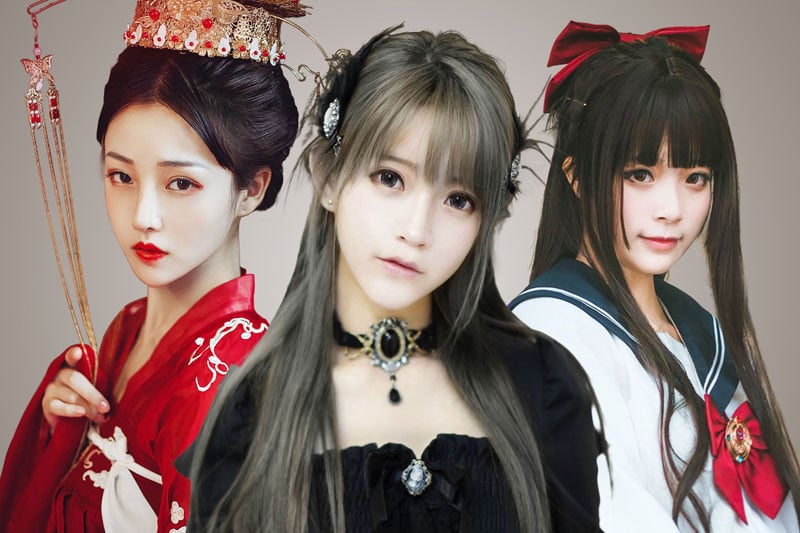 So if you are searching on the Internet for the: Popular Chinese Clothes List, then you are at the perfect place. I found the Best store to make your fashion in the Next Level, yes right, read the complete article to know very well about it that how to be an oriental beauty or handsome man!

Here I am going to share with you the Top 10 Popular Styles to build a high-quality vintage world and experience a different life.

When you’re in Shanghai, you probably want to wear a modern Qipao, when you travel to Chengdu, you may need a silk Hanfu dress. Or you plan to practice Kungfu in Shaolin Temple or Wudang Mountain, and you need a kungfu outfit. But if you want to wear a traditional Chinese clothing every day, or wear it at home too, renting is not an option, so it’s time to buy one. 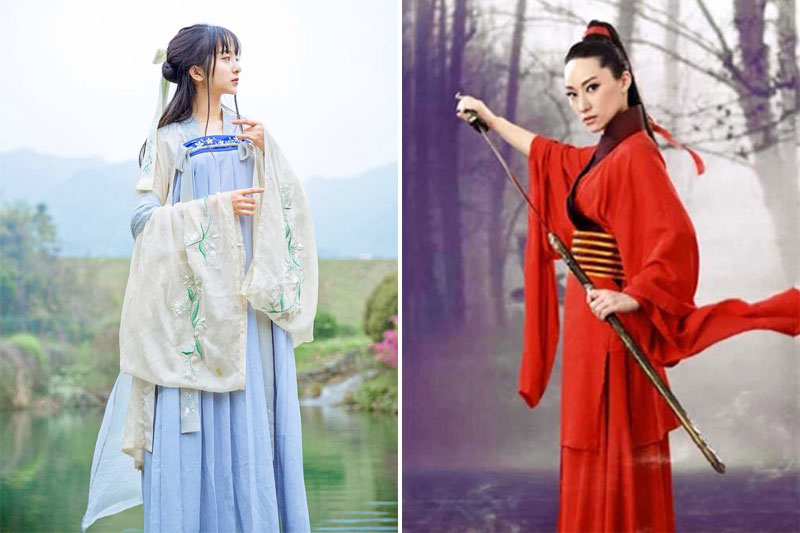 How to find an excellent Chinese clothing store near me? Luckily, Newhanfu is a great online store in Hongkong selling all kinds of Chinese clothes to the world so that you can get a quality made-in-China costume for a cheap price through the online shop.

Not only traditional Chinese style clothing, if it’s your first try, choosing modern is a good option. Besides, when buying a Hanfu, you may also need to purchase matching shoes and other accessories, don’t worry, everything you need is ready.

In recent years, the Chinese Vintage Element has become one of the fashion trends. It is not only a dress code of retro but also an essential embodiment of the artful personality. It is understood that Hanfu is becoming the most popular fashion trend in China any time soon.

You may have found that when you go to the university campus, or the park, or other famous tourist attractions, you can always see many young girls or guys in traditional uniforms. 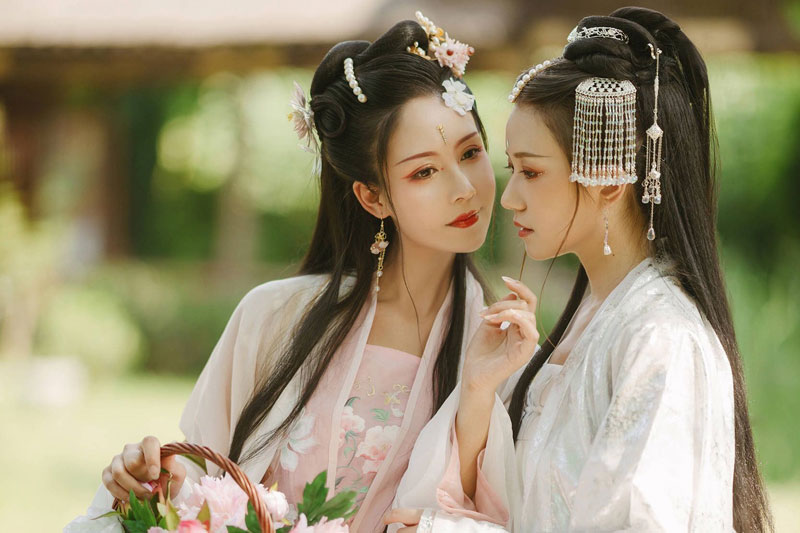 “I like Chinese culture since I was a child, so I can’t help liking the beautiful flowing ancient Chinese clothes,” Hong said, a lover of Hanfu from Beijing.

From the analysis, there are three prime reasons why Hanfu is becoming more and more popular: 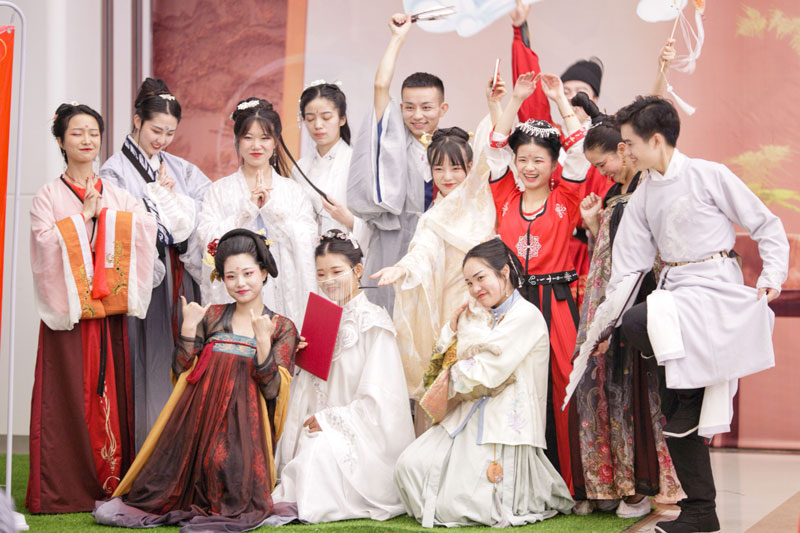 To make Hanfu more acceptable to the public in modern times, many of the Hanfu clothes are improved “Modern Style,” with more fashionable color matching, and wearing more convenient. With the efforts of fashion designers, Hanfu has gradually become a new Asian trend.

The charm of cheongsam lies in its elegant and noble beauty. At the same time, cheongsam has a very high demand for the wearer, which is not only reflected in the requirements of the body but also the temperament.

Cheongsam, also called as Qipao dress, became popular in the 1920s, it originated in Shanghai and soon spread all over China. Cheongsam connects the past and the future, life and art, and shows a unique oriental female charm. 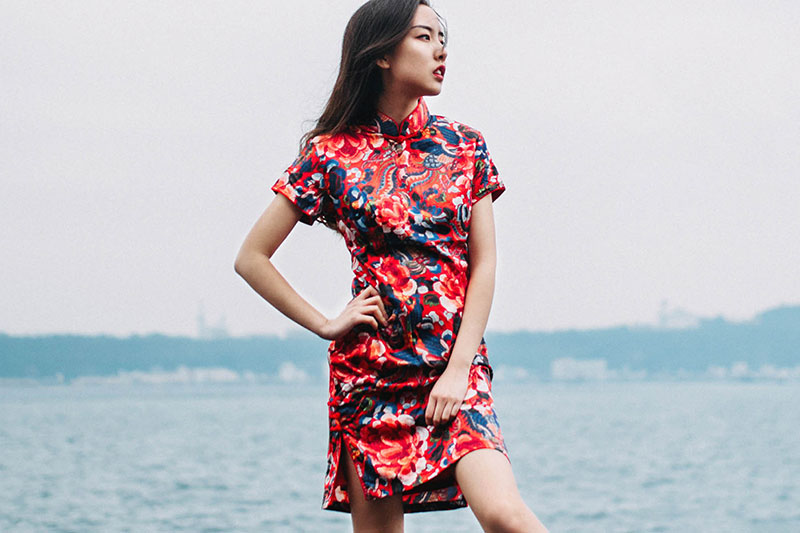 Although qipao was no longer concerned by the public at the end of the last century, in recent years, it frequently appeared in international fashion shows and returned in a new fashion form. Wearing vintage cheongsam, holding an exquisite fan or an oil paper umbrella in hand, elegant figure, and calmly steps, all these are the embodiment of classical oriental beauty.

As a symbol of traditional Chinese elements, cheongsam has entered the international field of vision due to the popularity of Chinese film and television abroad. Many excellent films that are popular overseas have women wearing cheongsam.

“Lust, Caution” directed by Ang Lee, takes the Republic of China as the background. The actress, Tang Wei, changed 27 cheongsam pieces in the film. Qipao not only highlights Tang’s tall and symmetrical figure but also implies the heroine’s different situation and inner transformation. 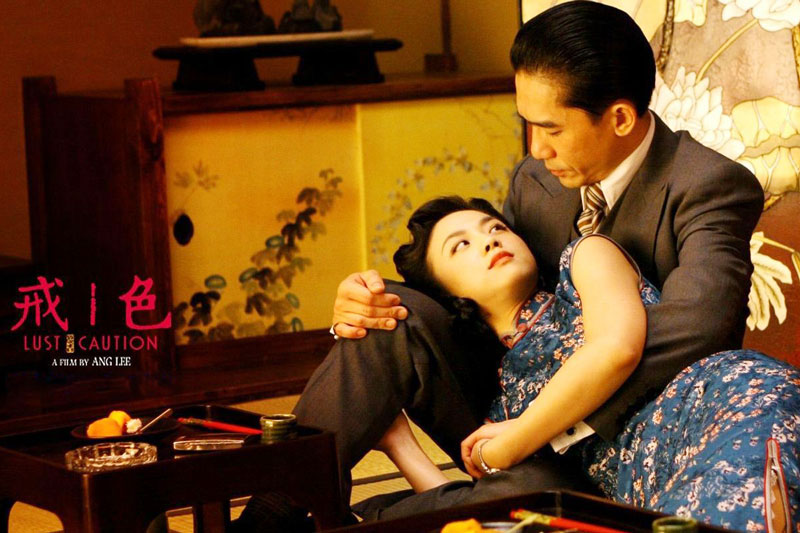 And it has also captured many famous stars, including Elizabeth Taylor, Madonna, Nicole Kidman, and Emma Watson. They are frequently wearing cheongsam and walking on the red carpet, or attend various recreational activities.

Martial arts films are being a window of displaying Chinese culture, which helps the external world to have a more comprehensive understanding of ancient China. As for displaying diverse characteristics of roles, compared with western films, costumes and makeup of Chinese knight errant movies show a particular mysterious oriental style. 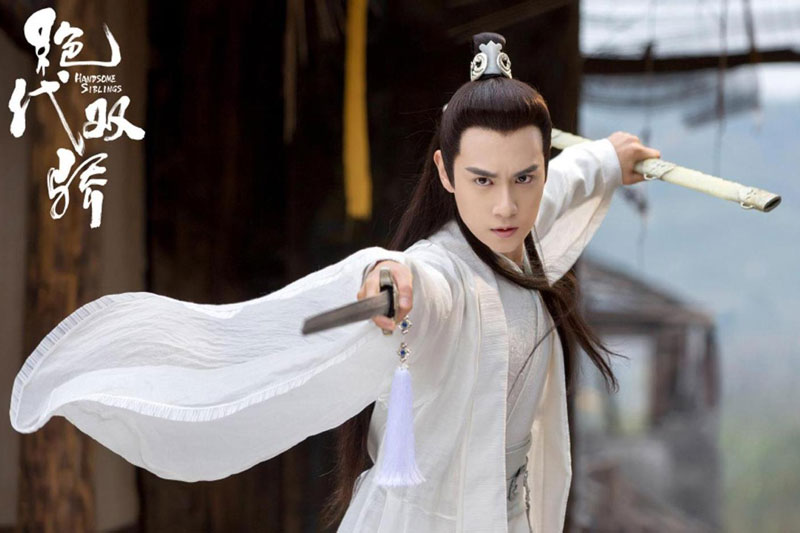 The importance of clothing for the film is self-evident. From the above, we know that Hanfu is a traditional Chinese dress. Some readers will ask, then martial arts clothing belongs to Hanfu? In fact, martial arts clothing is original design work nowadays, which is fictional. Although it looks like Hanfu, in principle, the martial arts style clothing we are talking about is not Hanfu. 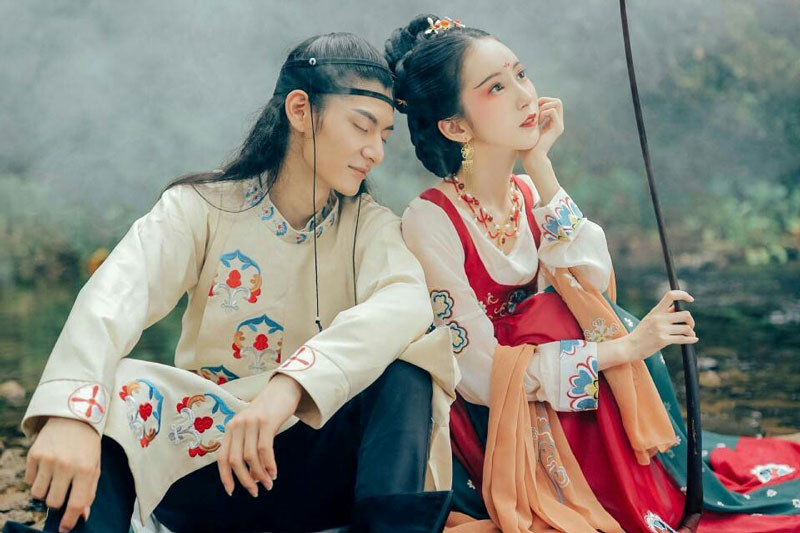 However, it shows a definite artistic charm, which is reflected in the shaping of characters, color emphasis, and the construction of the scene atmosphere. Just need the back of a role, you get to know that person is a fairy, a princess, or a guard, a swordsman.

Ready to explore the fantasy world of martial arts? Start the journal by choosing your first unique costume.

Kungfu costume, as the name implies, is a kind of sportswear for practicing Chinese Kungfu. It is usually long clothes, trousers and loose design. Kungfu has a long and profound history, and it is not only a fighting skill but also a spiritual culture. And there are many kinds of Kungfu, the most famous of which are Shaolin & Wudang.

The idea of Wudang’s Taiji(Tai chi) comes from the philosophy of Taoism, Unity of Heaven and Man. Except for Taiji, Wudang’s kungfu is also famous for Five Elements Boxing. If you have seen the movie “Kungfu Panda,” you must remember the five animal apprentices, tiger, crane, mantis, snake, monkey. Yes, it is a kind of Kungfu imitating animal action. 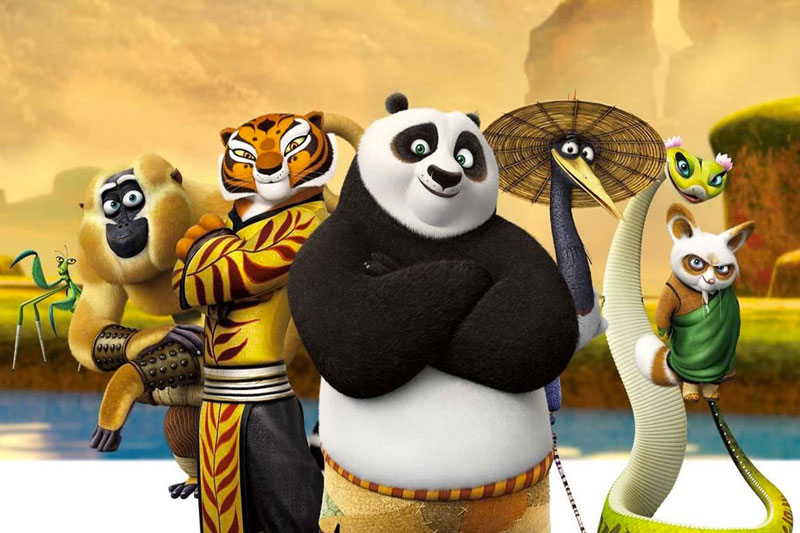 It is reported that every year, more than 2 million visitors from all over the world go to Wudang Mountain, hoping to see the pure Wudang Kungfu, and a few of them will stay learn with the master. So don’t be surprised when you travel to Wudang and see them practicing kungfu on the mountain.

When it comes to Shaolin, the first thing people think of is definitely Shaolin Kungfu. There is a saying that the world’s martial arts are out of Shaolin. It’s worth remembering that in 1982, the movie “Shaolin Temple,” starring Jet Li, made more than $100 million at the box office that created a miracle in the history of Chinese film. In that era, the ticket price was only 5 cents, which is equivalent to 2 billion people saw this movie. I believe you can imagine how popular the name Shaolin was in the last century. 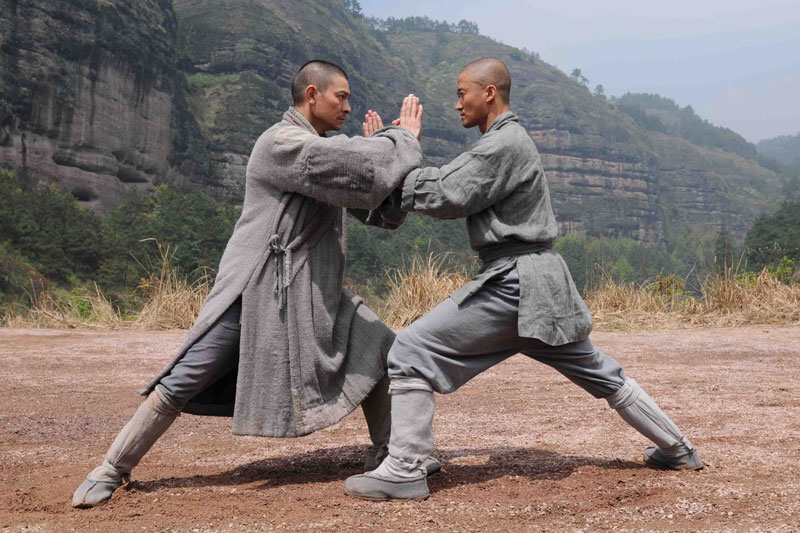 Now, there are more than 20000 people who go to Shaolin Temple to study Kungfu every year. At the same time, the Shaolin’s primary school, co-founded by Shaolin coaches and gym teachers, only recruits kids and teenagers, has more than the enrollment of 100000 students.

Kungfu already has a vast influence due to the emergence of a large number of Chinese Kungfu films and TV dramas. In addition to Shaolin and Taiji, other types of kungfu, like Yongchun-Boxing and Jeet Kune Do, are also widely spread around the world. Besides, fans of Kungfu superstars like Jackie Chan and Bruce Lee are everywhere.

More than 2000 years ago, in the Spring and Autumn period, traditional Chinese robes had been widely used. If you know Confucius and the Three Kingdoms, or have played related video games, what they were wearing were typical robe clothes. It’s the most basic clothing in ancient China, and the highest form of male’s dresses in the past dynasties leading to the 19th century.

With the development of ancient textile technology, the garment is continually improving, including materials and designs. In the most prosperous period of the Song Dynasty and Ming Dynasty, very intricate embroidery patterns were popularly used. For example, the supreme Dragon Robe, which can only be worn by the emperor. As for the noble’s uniform, the designs include Kylin, lion, crane, and so on. A well-made robe often takes more than one year to produce. 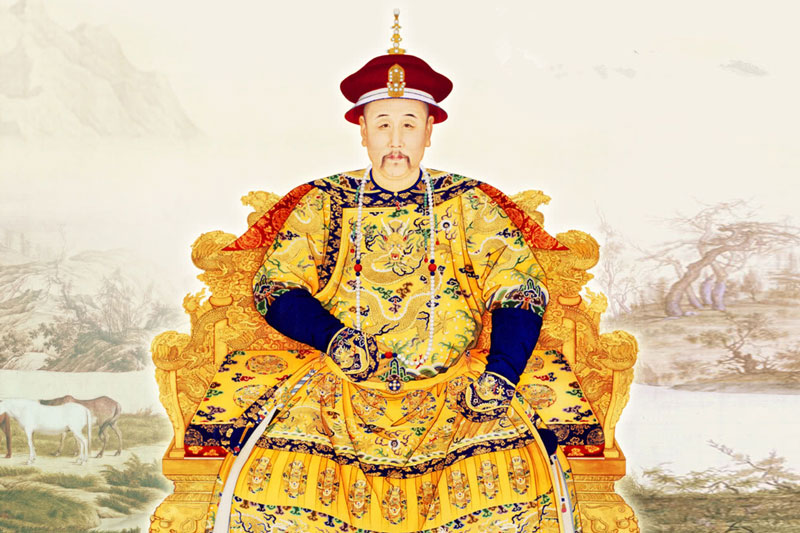 At the same time, in the Ming Dynasty, a kind of print robe was specially invented for royal guards and ancient captains. The most famous one known as the flying fish suit. If you love riding, archery, sword, this style is your best partner. 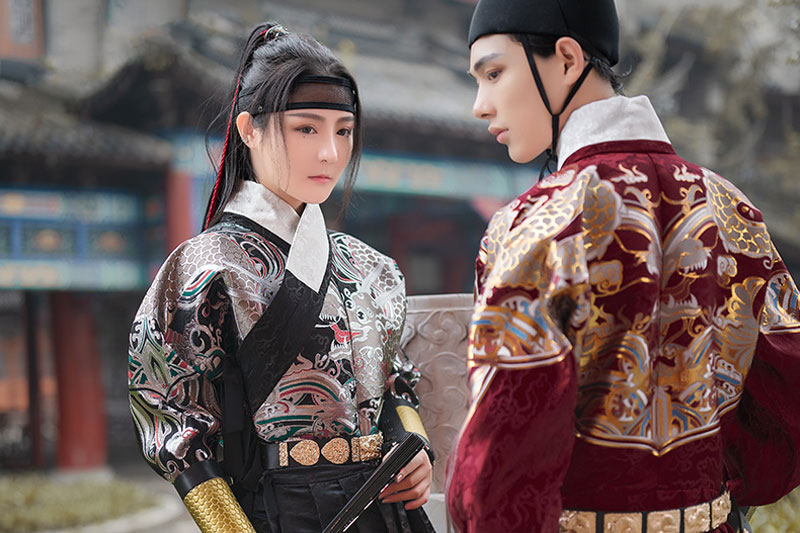 The robe is also the favorite leisure clothes of poets and painters. They would apply the artworks to embroidery, such as landscape paintings or poems on clothes. In terms of trends, they lead the old fashion. And it’s also the daily clothes of Taoists and Monks, but theirs are more simple and plain, usually to a solid color and no pattern.

Last year, the retro robe was the most popular traditional Chinese clothes for males, even used as a wedding dress, according to Beijing News. Therefore, if you want to experience a fantasy life of elite men from ancient China, just start it with a vintage robe.

Buy the first traditional Chinese dress for You

Newhanfu store specializes in Chinese traditional clothes made from high-quality silk you can wear every day. You can even get nice Asian clothing or apparel set for a very low price and enjoy fast, free shipping worldwide.

There are all kinds of China’s dresses for you to choose from, you get to try everything: Hanfu, Qipao, Material Arts, and Kungfu costumes. The store also carries a nice variety of retro outfit, and you can get many different vintage clothes and see what they look like on you. 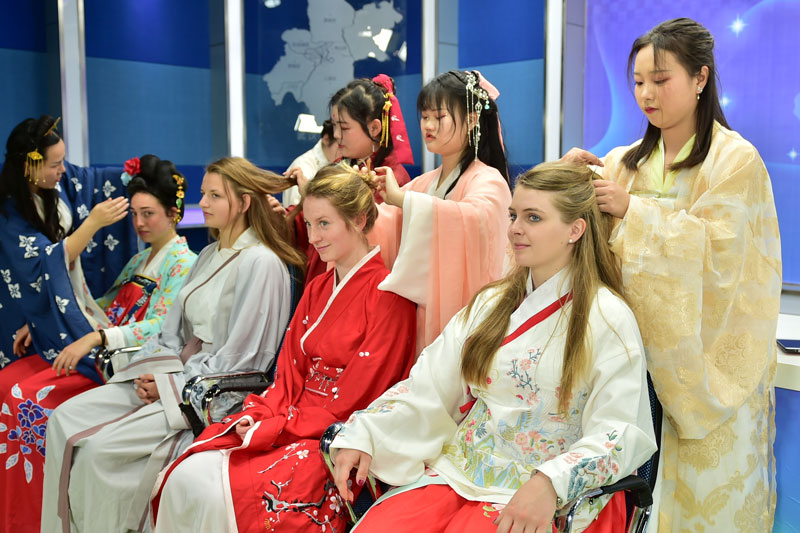 To its credit, the customer service here is very excellent, skilled at telling you how to put on your clothes and tying the belt & knot. And they would help customize suit if you have special size requirements. Of course, any other questions, they will reply to all of them within 24 hours.

Yes, there we have it, the best Chinese traditional dress online store ever, offering awesome oriental vintage clothes. SO it’s no more a difficult thing to find a traditional clothing store near you and me, whether you live in the US, Canada, UK, Sydney, Singapore, Malaysia, Hong Kong, Korea or Japan. Let’s Shop Now>>